The lads have taken their seats, Jack Effel has addressed the whole world and we are ready to crown ourselves a new WSOPE champion. 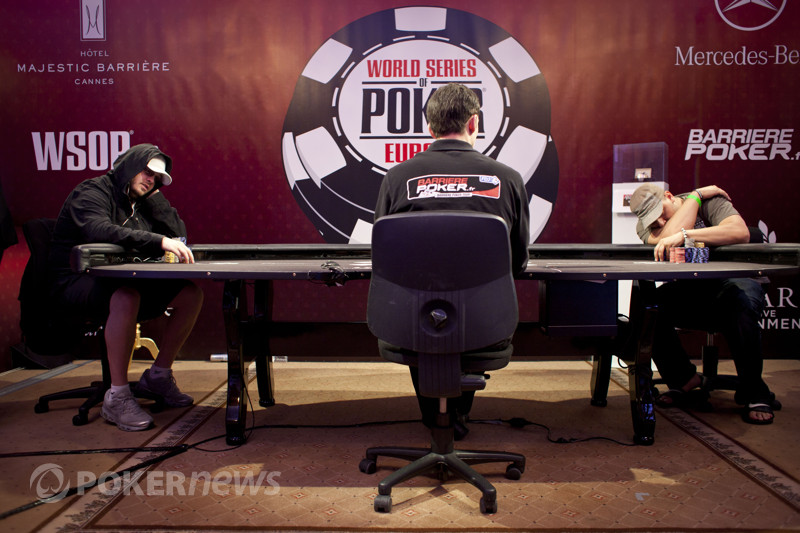 "What are those red chips worth?" someone around the perimeter of the table asked. The two players have just taken their seats to unbag, and there is indeed a new red T25,000 chip on the table. Or, on half the table. Shawn Buchanan was confused.

"Red chips? I don't have any of those." Mizrachi has 1 million worth of them, and the reds essentially represent the disparity in the two stacks.

The heads-up final should be rolling in just a moment.

Mizrachi vs. Buchanan For the Bracelet

After three days of play, our starting field of 125 has been reduced to the requisite two for the final showdown.

It's going to be Michael Mizrachi taking a sizable chip lead into the duel with Shawn Buchanan, and it's a best-of-one freezeout.

The match is tentatively scheduled for 9:00 P.M. -- less than an hour from now -- but we can't get confirmation on the time from the staff. We'll let you know if we hear anything new. And we'll be back as soon as the players are.

Roger Hairabedian Eliminated in the Semifinals (€112,092)

Michael Mizrachi raised to 26,000 from the button, and Roger Hairabedian came along to the flop. It would end up being the last flop they'd see.

The dealer spread out

, and Hairabedian led out into the pot with 30,000, and Mizrachi quickly called. The turn came the

, and it was the action card. Hairabedian stacked out another 80,000, and Mizrachi wanted to play for more. He made a very big raise to 480,000 total, and Hairabedian wasn't going anywhere.

"Well," he said. "It's the time." He began to reach for his whole stack, but he paused to reach across the table and shake hands first. "Congratulations," he said with an outstretched hand. Mizrachi didn't flinch, so Hairabedian tried again. "You don't want congratulations? You win. Congratulations."

The Grinder had turned the nuts, but he still needed to fade the board pairs to notch the win. He was clearly a bit nervous as he stood from his chair and sweated the final card -- the

A pump of the fist and a shake of the hands one more time, and it's Michael Mizrachi who's moving on to the finals. It became clear that it was going to take a cooler for this match to end at a reasonable hour, and that's just what we got as Hairabedian is set up and run out the door. The crowd favorite will pocket €112,092 for his efforts over the past three days.

Mizrachi With a Little Momentum

There was a limped pot and a flop of

and Michael Mizrachi bet 12,000 and Roger Hairabedian called. The turn was the

and Mizrachi bet 36,000 and Hairabedian called. The last card was the

"Make Me a Little Smile"

That sent Hairabedian deep into the tank, and it'd be at least five long minutes before he made his play. He stacked out the call in front of him, then pulled it back into his stack to see what he was working with. Then he pulled the 200,000 back out and shot a glance across the table. Mizrachi was deadpan.

"Come on," Hairabedian urged. "Make me a little smile and I'll pay you." Nothing from Mizrachi.

Now, Hairabedian took one finger and slid the stack of blue chips right up next to the betting line -- the betting line which, incidentally, is not in play here. The chips were right in the corner, and Mizrachi gave a glance up at the floorman presiding over the proceedings. Hairabedian pressed his luck even further, holding that finger right behind the chips, just an inch from toppling them over into the pot. He held it there for a long while as he considered, then pulled the chips back and quietly placed his cards toward the muck.

The guys are having a twenty-minute rest.

Roger Hairabedian limped in from his button, and Michael Mizrachi knocked the table for a free flop.

, and Mizrachi flicked out one T10,000 chip after the last card. Hairabedian raised to 30,000, and Mizrachi didn't waste much time making it 60,000 total on a reraise. Hairabedian was undeterred, though, and he raised it back to 120,000. Grinder considered for about a minute before folding, and Hairabedian showed his airball

as he pulled in the pot.